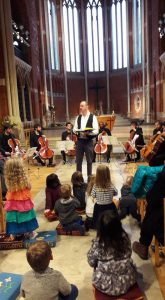 Saturday 11th February, 2017. concert starts at 3.30, and will include Alice in Wonderland; some songs by Schubert and a set of virtuosic folk songs arranged for the ensemble.

“Lewis Carroll’s Alice’s Adventures in Wonderland contains many strange sights and creatures, but there’s one phenomenon the intrepid author forgot: the cello octet. Cello octets are rarely spotted in the concert hall, partly because there’s not much music for them to eat. Yet Britain has a splendid specimen in Cellophony, and here they were in this pleasant concert repairing Carroll’s omission in Alice in Wonderland, a very engaging 25-minute romp written to mark the book’s 150th anniversary by the group’s founder Richard Birchall.

In four incisive, witty movements, the cellos conjured the White Rabbit’s hurrying, a waltzing Alice, the caucus race, the Mad Hatter’s tea party and the Mock Turtle’s musings through notes alone. In five others they chipped in with underscoring a miniature version of Carroll’s text, speckled with delicious impersonations (loved that lazy Cheshire cat).

The undoubted highlight was the animal round-up in A Pool of Creatures, a jostling collection of musical impersonations quoted from Schubert, Prokofiev, Saint-Saëns and others, each transferred with dashing finesse to the ensemble’s sound.

Fully at home in the cello’s world, Birchall brilliantly exploited the instrument’s facets, from autumnal melancholy and comic surprise to the percussive effect of scurrying fingers tapping the wood. I only wished the piece had been longer.” Geoff Brown – The Times