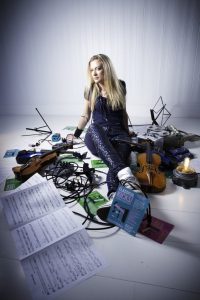 Jazz and classical fusion violinist (and sometimes vocalist) Lizzie Ball will be joined by pianist Dave Maric for this year’s opening night concert.

Lizzie and Dave will perform a range of music from classical, jazz, world and contemporary, including works by Stravinsky, Bach, Debussy, Maric, Gershwin, Piazzolla, and more

Lizzie enjoys a multi-genre career as a violinist, weaving between classical, jazz, rock and world music, and more recently carving out her own versions of classical fusion with her invention and creation of Classical Kicks.

Lizzie’s creation of “Classical Kicks”, a unique night of classical music performance at the legendary Ronnie Scotts Jazz Club in Soho, London (the first classical night in the clubs 55 year history) has been met with critical acclaim and is perfect platform to marry exposure for up and coming artists with established artists, in which exciting new musical territory is explored crossing all genres. Classical Kicks has been featured on BBC Radio 3 and was given a featured stage performance (in its touring ensemble show version) at the Henley Festival 2013 sharing the billing with the likes of the RPO, Beach Boys and many more. Following this, Lizzie founded Classical Kicks Records with a view to promoting recordings within the brand, and continues to grow, with future festival appearances, as well as the very first CK festival and a brand new concert series planned for 2015.

Lizzie is leader of Nigel Kennedy’s Orchestra of Life, a role for which she was handpicked by Kennedy, and together this vibrant young ensemble (made up of mainly Polish musicians brought together by violinist Alicja Smietana) toured extensively between 2010-2012 throughout the UK and Europe to critical acclaim. During this time, their performances included a tour of Vivaldis Double Violin Concertos in which Lizzie was soloist with Nigel, performing to sold out audiences in the Royal Albert Hall, Bridgewater Hall and Symphony Hall, Birmingham. Lizzie’s performance as leader of the OOL together with Nigel and the Palestine Strings in the BBC Proms 2013 was a memorable moment. The Independent hailed it as “a seamless exercise in musical enchantment” , and indeed it was the first time a Palestinian Ensemble had been invited to perform in the internationally renowned festivals 109-year history. They combined Vivaldis Four Seasons with Arabic improvisations played mesmorisingly by the young talented Palestinian string players to a sold-out Royal Albert Hall.

We are very excited that Lizzie and Dave will be joining Chamber Players for the opening night concert this year.

Tickets are £10 full price / £7 concession price and  can be booked here.