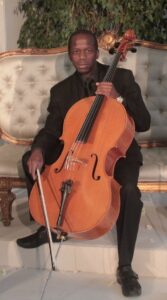 David is a London based freelance cellist and teacher. Since graduating from the
University of Manchester and Royal College of Music he has played with
orchestras including the Royal Philharmonic Orchestra, and the recently founded
Chineke! Orchestra. As soloist he has performed Dvorak, Elgar & Panufnik cello
concertos. David has also performed in numerous theatre productions including
at the National Theatre and on tour in countries such as the USA, Brazil, China
and various countries in Europe.

David has extensive teaching experience. He teaches privately, and in schools
and has taught at Centre For Young Musicians and on numerous summer music
courses. He regards teaching as an important way to pass on and add to the
invaluable knowledge and skills he received from his teachers.