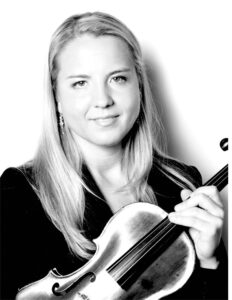 Dominika Anna Rosiek was born in Poland and started her violin studies at the age of 4. Within a year she had already recorded pieces for Polish TV and  Radio , took part in national & international competitions and festivals  winning many prizes, including a special Prize at the Russian Music Festival .

Throughout her childhood she has been sponsored  by the National Sponsorship for Talented Children. In 1993 she has recieved a special  invitation to perform  for the Pope John Paul II in Italy.  Dominika joined The Purcell School of Music where she was  awarded a full scholarship , won the Guivier Prize for outstanding string player an was  awarded the Alfred Brendel Prize.

Dominika  continued her studies at  Royal academy of Music in London where she was also awarded a full scholarship and finished her BMUS and PGDip wit1st Class Honorus and received awards from Hattori Foundation, Martin Music Schialrships, Worshipful Company, Park Lane Group, Live Music Now and many more. She is also a prize winner of many International Competietions.

Dominika is also very experienced Leader and an orchestral player . She is a member of Tchaikovsky Camerata ( former Russianl Virtuosi of Europe). She has Lead European Youth Orchestra, London Chamber Players, Philharmonia Orchetsra Soloists, Southwark Sinfonia, Verdandi Camerata , Co- Lead Royal Philharminc Orchestra ,and Orchestra of Life with Nigel Kennedy .  She continues to give recitals  and play chamber music  across UK and Europe.

Aside  of her performing career she has dedicated her time to the upbrining young violinists. Teaching has been her passion since she can remember.  She has  more than 20 years  of teaching experience . Many of her students have already  won top prizes  at various International & National Competitions and Festivals.  In recent years she has been  often invited to adjudicate many International competitions.  In 2013 together with her husband Nguyen-Khac Uyen  found  “International Music Masterclass “ which has been running succesfully ever since in Norway, Poland and UK.

Dominika has her own Teaching studio however she also teaches at the London Russian Music Academy . Recently she started working for Music Masters as a Mentor for their new programme  “PATHWAYS”.