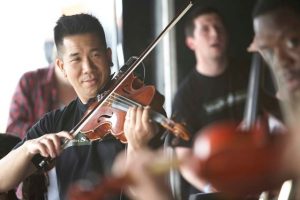 Oakki Lau’s diverse performing career reflects his interest and enthusiasm for all kinds of music from playing baroque to pop. For 6 years he was a member of the Gramophone Award winning baroque group La Serenissima, with whom he toured extensively and performed at the Wigmore Hall. Other gut string work includes playing with The London Handel Orchestra, The Little Baroque Company, English Touring Opera, Hanover Band, Spiritato and invitations to play in Denmark, Croatia and Norway.

Oakki has played at the Proms, performed live on Radio 3 from the Royal Festival Hall, recorded at Abbey Road and toured the U.K. and Europe with the multi ethnic orchestra Chineke! He was also invited by the British Council to work in New Zealand to celebrate cultural diversity.

Oakki has performed with saxophonist Jess Gillam at the Apple Music awards, with the harpist Catrin Finch at The House of St Barnabas, and the rapper Kano at the Royal Albert Hall and on Later with Jools Holland.

Recordings include Britten War Requiem with the Gabrieli Consort, A Short Album About Love and Fin de Siécle with The Divine Comedy and more recently Max Richter’s album Voices, Ellie Goulding’s Worry About Me (Director’s Cut) and the 2020 reissue of Bob Marley’s Legend.

Oakki studied the viola with, and assisted, Rivka Golani in London,   baroque violin with Adrian Butterfield and baroque viola with  Annette Isserlis at The Royal College of Music, supported by the Joan Weller award. He teaches at Hill House, More House, St Philips and  Westminster Under School as well as on holiday courses for Camden Music Services. He is proud to have taught on every one of the Chamber Players courses.

This summer he’ll be doing a lot gardening, cycling, cooking and playing classic Ibiza anthems at various race courses and in the gardens of stately homes with the Urban Soul Orchestra.